Episode starts with Jae Hwa taunting Jung Tae with the autopsy report in his coat pocket. Before they can start fighting he receives the news that both the French and Young Mi sides are checking for papers in Bangsamtong. Jae Hwa rushes outside and pays off each police officer from his own pocket to get them to stop beating the people. Jung Tae also rushes outside and starts hitting the police officers when they try to get Ok Ryeon and a child. It ends up being a full out fight between Jung Tae and the police officers. A crowd gathers around to watch and cheer for Jung Tae. So-So begs her father to stop or help him, but her father is too busy enjoying the show. Finally the commander had enough of his officers being beat and gets off the horse to challenge Jung Tae directly. He pulls out a sword.

Head police officer starts a hack-a-fest and Jung Tae avoids easily. Jung Tae lands critical punches on the man’s stomach and knocks him to the ground. However, Jae Hwa arrives and punches Jung Tae for starting the fight mindlessly and scolds Old Man Fly (So-So’s father) for letting things get out of hand. Jae Hwa sends Jung Tae to Federal prison and Soon Po head officer to be healed at Daeha’s restaurant. Jae Hwa shoves Jung Tae into Soon Po’s hands. Shinichii had watched the fight in the background.

Jae Hwa goes to confront Leader Seul about the inspection and how he is going to resolve it. He reminds Leader Seul of the promise that Hwangbang made to keep Bangsamtong safe by having inspections only on set dates. Leader Seul comments that Jae Hwa sounds just like the previous leader, as if he cared about the people. Leader Seul says Jae Hwa broke the promise first by using Il Gook Hwae money and sets a new tax of 7% on the Bangsamtong. Jae Hwa refuses and says he will sell his own organs or Club Shanghai before taking that exorbitant fee from Bangsamtong people. He also delivers the new that he gave Jung Tae to the Feds.

Gaya also receives that both sides inspected at the same time. She responds that this is a chance for the people to look up to a new leader who had beat up the untouchable police officers. Shing Jung Tae has become the hero of Bangsamtong. Meanwhile Jung Tae is tied up at the police station (the one from Gaksital) and beaten with the police bat severely. The officer asks him if he wants to be a hero and Jung Tae responds he just wanted to protect them and will still do so. Ok Ryeon and company discuss Jung Tae’s imprisonment and Old Man Fly says they need money to get Jung Tae out. The group decides to start a fundraiser to gather money, even crossing the border. Ok Ryeon takes out her money that was saved for making a record to use for Jung Tae. Meanwhile Jae Hwa is having trouble hiring main singers. Russian refugees have refused as well his first prospect, Mei Ling. He decides to open a huge audition…and Ok Ryeon walks in with So-So.

Leader Seul asks about Jung Tae and is told he is being tortured at the police station. They decide to train him early so that he won’t become like his father, making him into a hunter for Hwangbang instead. So-So and Ok Ryeon take out the money that gathered and ask for Jae Hwa to help take Jung Tae out. However, he says that Jung Tae beat up 24 police and that small amount won’t cover anything. Jae Hwa offers for So-So stand on stage, but decides that it won’t do. Ok Ryeon pleas for Jae Hwa to help and that she will do whatever she can for him. Soo Won rushes in to confront Jae Hwa instead. Jung Tae is locked in prison and the others in the cell give him water since this is the only thing they could do. They are totally inspired by his rebellion against the police. Soo Won takes Jae Hwa to show how people are donating to Jung Tae’s fundraiser. She reminds him of the facial expression the people had that day and how people’s hearts fluttered for Jung Tae. She tells Jae Hwa that he will never be owner of Bangsamtong if he doesn’t defeat Jung Tae.

Leader Seul comes and donates 50k won to the fundraiser. He is pleased that a plan to attack Jae Hwa ends up with Jung Tae being a hero. Jae Hwa ponders Soo Won’s words and is jealous of Jung Tae’s popularity. He uses peanuts like pulling petals to decide if Jung Tae should live, but crushes the “save him” peanut. Jung Tae thinks back to the beatings he witnessed that day and Jae Hwa’s warning as well as the praise the others gave him in the cell. He is pulled from his musings when a person broke into his cell and tried to stab him to death. WOW, that was sudden.

The people of Bangsamtong are now lined up to receive Jung Tae after his release from prison. Jae Hwa is borrowing money from Standard Bank again. He opens the door to go outside and is greeted by Bangsamtong people. They think he is going to release Jung Tae and is handed the money they had collected.  The praise him as the real owner of Bangsamtong. He says they will celebrate tonight at Club Shanghai. Leader Seul arrives at the prison to release Jung Tae, but he has already been bailed out by Gaya. Leader Seul is shocked and angry that Jung Tae is being taken by Il Gook Hwae. Coincidentally, Gaya walks in and comments that Young Chool and Hwangbang must have had a “iron clad” friendship. However, she needles them with being so neglectiful with his death and accuses them that they have things to hide. Baek San is insulted by Gaya’s accusations. Leader Seul says the direct cause of death was swords like Gaya’s and where her goons had been. She agrees that she took his last breath away, but only because he begged to be killed. Baek San says its still murder, but she responds she freed him from unbearable pain that “someone” caused…while looking at Baek San. Leader Seul comes back with the comment that she looks like her mother who had came by Shanghai the same way and knows a lot about her death. Leader Seul invites her for “storytime” tonight and she agrees.

Jung Tae is now freed. Ok Ryeon rushes in to hug him as he steps outside. Tofu is fed of course. Gaya and Leader Seul watches in the distance….and whoops Jae Hwa too. Four way stare down! Leader Seul says not to worry and that he will use Gaya to get at Denkai (old Japanese gramps). Gaya decides she must really go to not lose face. While Jung Tae is recovering, he is accosted by everyone trying to feed him. Then finally Ok Ryeon and Jung Tae are left alone. She tells him that because she couldn’t do anything while he was in there, that made her feel the worst. He is jsut glad she waited for him. Soo Won congratulates Jae Hwa on finally understanding what the situation is and blows him off. Poor Jae Hwa is head over heels for her. Aoki bumps into Jae Hwa and shows him the notice that he is the new Director of Public Affairs.

Creepy Shinichii walks in where Jung Tae is sleeping. They go outside and Shinichii tells Jung Tae that his fate is to be eliminated. A fight ensues and Jung Tae is losing badly because of his injuries and the fact that Shinichii is still too good. Gaya is meeting with Leader Seul. They comment upon her last name which is Deguchi instead of Denkai because of her Joseon father. She gets impatient about what he called her here for and says she will ask for a duel if he doesn’t spit it out soon. Baek San comes in  and says Shinichii is fighting injured Jung Tae. Baek San is sent to help Jung Tae out. Ggoo is leading the way….? Meanwhile Jung Tae asks Shinichii if he is concerned with Gaya or Il Gook Hwae, He is told to mind his own business. Poor Jung Tae can’t get a break.

Shinichii is about to deliver a killing blow before being stopped by Baek San. They greet each other as enemies and Shinichii says its a fight in the name of Il Gook Hwae. However, Baek San says Hwangbang’s name is on the line to keep their treasure, Jung Tae. The stakes are that the loser leaves Shanghai with both organizations’ names on the line. Shinichii says when the fight is over, he will kill Jung Tae. Both are prettily evenly matched even though Shinichii is using a pole while Baek San is fighting with his bare hands. Ggoo sneaks up on Jung Tae is comments that look at Baek San and his special ChulSaJang move where the inner strength technique leaves a huge bruise on the victims chest. Shinichii spits up blood and JUNG TAE MAKES THE CONNECTION BETWEEN HIS FATHER’S BODY AND BAEK SAN. ‘Dis gonna be good!

Comments: Yes, yes finally! This episode is the best so far! Jung Tae is standing on his own more, like his father, protecting his people! Though he is still a pawn of the three big forces, Jae Hwa, Il Gook Hwae, and Hwangbang, the ending of this episode made him have an epiphany! It is time for him to rebel against Hwangbang with the helpful comment of Ggoo. However things are about to be complicated with Aoki entering the scene. He is a powerful one and its a plus to the Il Gook Hwae side when Shinichii is probably now a minus. Used and gone since it is unlikely he can survive Baek San’s blows. Hmm this leads me to wonder how Jung Tae will beat him when the time comes. Perhaps Mo Il Hwae may have some pointers, I would love to see a fight between him and Baek San. I really enjoy watching the fights between the really skilled ones. 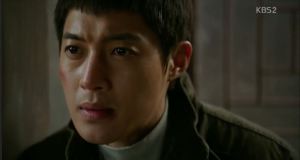