Yuttapong, Nan and Nark’s father, borrows 20 million HK dollars (~ 80 million baht – GASP) from the Hong Kong mafia boss Lin Lan Sir/Khun Lin. Yuttapong promises to pay back in three months and interest will be charged. Yuttapong also agrees to give his eldest daughter Nan as collateral. Khun Lin is shocked at first but when he sees the beautiful Nan he agrees.

Nan and Nark are the only two daughters of Yuttapong. Nan is  beautiful and liked by everyone while Nark is disliked by everyone. She is not as pretty as Nan and others kids always prank her.

Because of their dad’s debt, their family of three moves to the countryside. Nan is unaware of their father’s financial troubles. Nark, despite being the youngest, is more mature and able to accept the situation. The father and Nark decide not to tell anything to Nan from the time being. The father had previously asked Nan how she would take it if his business went bankrupt; Nan immediately threw a fit saying that she could never face her friends if their family was poor. Thankfully she gets along with her younger Nark and is able to forgot about them living in the countryside a little bit.

Yuttanapong  decides to flee with Nan leaving Nark behind. Nark is caught by Jongsing, who is Khun Lin’s right hand man. At first, Jongsing doesn’t know what to do with Nark but hands up bringing her back to Hong Kong. Once in Hong Kong, Nark meets Khun Lin. She spends quite a long time explaining to him that she doesn’t know where her father and Nan are. Who is he anyway to mistreat her and drag her all the way from Thailand??! Nark slowly realizes that Khun Lin is part of a mafia to which is father is indebted. Nark realizes that her father chose to run away with Nan leaving her behind (That feeling of betrayal). Khun Lin’s men scare Nark so badly that she faints. Khun Lin shows Nark her father’s letter when she wakes up. The father decided to give her to Khun Lin instead of Nan. Nark will be more useful than Nan and Khun Lin must let her continue school.

Khun Lin makes a deal with Nark; if she is able to repay the debt he will leave Nan alone. Jongsing then takes Nark to her new place – a dormitory. She will also work in the construction site where the dormitory is located. Food will be eaten at the construction site’s canteen and her wages must be turned in to Khun Lin. She is also ordered to attend school. How can she repay the debt doing manual labor while attending school? On her first day at work, Nark befriends another worker Tar Hai. He helps her find another job and listens to Nark’s concerns. Tar Hai is shocked to learn that she owes money to Khun Lin but reassures her by saying that it’s better than being a mistress. Mistresses are quickly dismissed when men do not fancy them anymore (Good point).

We get a glimpse of the mafia business aspect of the drama when Khun Lin meets with his associates. Their organization wants to make a deal with Carlos Tapia, a weapon dealer. Of course Khun Lin has to make the deal since he is the head of Chaihong Group. Everyone else agrees to give Khun Lin a chance – he can finally prove his ability as a leader. Khun Lin’s  authority and ability to conduct the deal is challenged by Puey Lin only (Or let’s just say that he is the only one to be straight forward about it). Yong Wen and Sang Gui call out Puey Lin for disrespecting their boss and not giving him  a chance.

Jongsing warns Khun Lin to keep an eye on Sang Gui and Puey Lin. They could do anything for power.

Interpol is following Carlos Tapia in the Czech Republic. He is staying in a hotel with one of his girls when the cops barge in. Carlos is able to kill one of the cops and escape. The one that survives, Patrick Button, a member of Interpol vows to catch him.

We also meet Fang Mei Jing, a woman interested in Khun Lin. When Mei Jing  pays  a visit to Khun Ling she is advised by Jongsing not to bother since Khun Lin is not in a good mood. That doesn’t deter Mei Jing (She should probably have listened to JongSing). Khun Lin is in a terrible mood. He is annoyed by every word she says. When Mei Jing notices the picture of Nan, she asks Khun Lin if he thinks Nan can handle being a mistress. Nan seems weak. Khun Lin implies that Nan might be more than a mistress… Mei Jing is not happy about the way Khun Lin treats her. Khun Lin uses her service when he attends cocktails and parties but doesn’t give her any attention outside of that. 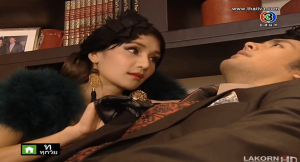 Back in Thailand, Nan and her father are driving far far far away. Nan is still confused about where they are going. What about Nark? Nan shouldn’t worry about Nark; she can take care of herself. Nan and her father end up having a big argument. The car is stopped on the side of the road and Yuttapong has to run after her. Would she have agreed to be a mistress?! Nark is not that pretty to be a mistress that’s why he sent her. Nan calms down but is pretty depressed by the news. Nan is also thinking about the man she saw in a restaurant while she was waiting for her father. That man is none other than Khun Lin (Feelings?). They find a quiet place to stay but their peace is quickly disturbed when they are attached by some men. Most likely Khun Lin’s men. 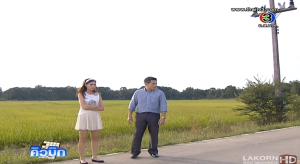 Bomb’s acting is not terrible but not that good either.  I was expecting so much from that drama that I am disappointed. We have to take into account that Bomb is relatively new in the industry. I believe this is the second drama he does for Channel 3. The character he plays is also young. Khun Lin seems to be the new leader of their organization; as the godfather he needs to prove his leadership skills and competence, which explains his confused and not so convincing scary face. Hopefully the drama will get better plus I like Min’s acting.

I  realized that the father never intended to give Nan to Khun Lin. From the beginning, it was Nark. The father always praises Nark saying that she should have been the first daughter since she is so mature. The letter he wrote also shows that Nark has exceptional qualities that Nan clearly doesn’t possess. Honestly if the father had given Nan away she wouldn’t have lasted. Khun Lin would have probably been tired of her. Nan is pretty but not the smartest; she seems to be the kind of character that would create more trouble than anything else… Khun Lin hasn’t given up on her yet but I wonder how long he will fancy Nan. Probably no more than three episodes…

Also can they please get rid of this fake moustache that Sang Gui is wearing??!! It’s awful and it looks so FAKE!