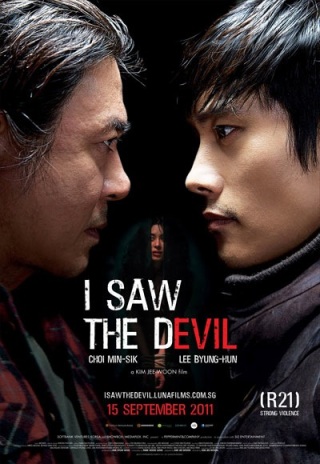 I Saw the Devil, or I think better re-named as I Became the Devil, tells the story of Soo-hyun’s revenge against a serial killer who killed his wife. The psychopath Kyung-Chul has the habit of kidnapping young women and hacking them to pieces. As a hardened government official, Soo-hyun loses his soul piece by piece as he takes revenge against this man. But instead of just tracking the man down and imprisoning him, he chooses to engage in a cat and mouse game by catching and releasing Kyung-Chul in a twisted revenge scheme. Repeatedly, he confronts the killer, engaging in hand to hand combat and setting traps, trying to have the killer feel remorse. Both carve a giant path of destruction as they refuse to give in. However as the game wears on, has Soo-hyun become the monster he is tracking? How far is he willing to go? The game comes to close in the killer’s own warehouse, but who will come out on top? Even the serial killer himself comments about Soo-hyun, “The bastard is a complete psycho.”

2 thoughts on “I Saw the Devil (악마를보았다)”