The search for Nark continues. Khun Lin is pretty much sure Nark is dead.

Nark, who is passed out, wakes up and finds Khun Lin’s phone laying on the ground. She uses it to call Jongsing. Jongsing can’t believe that she is alive. Khun Lin takes the phone asking if she is alright. Nark asks him the same question. Is Khun Lin alright? Khun Lin answers yes, but where is she? Nark herself isn’t sure. She describes a smelly place filled with garbage. Khun Lin tells her to hang in there. Nark must endure it for him.

Khun Lin rushes his men to find Nark. She might not make it if they take too long to dig up. As a matter of fact, Nark ends up passing out again.

It’s at night that Khun Lin and his men finally finish drilling through a pipeline connecting to the underground garbage storage. They find Nark laying unconscious. Khun Lin tries to give her some oxygen and calls for a doctor. When Nark finally opens her eyes, the first thing she asks is if Khun Lin loves Mei Jing (LOL). Khun Lin is shocked (I would be too. This is the first thing she thinks about in this situation). Jongsing is shaking his head and judging so hard (:-D). Khun Lin tells Nark that he doesn’t love Mei Jing. Does he love Nan then? Khun Lin answers no. Nark is relieved to hear his answers.

Before heading to the hospital, Nark confesses her feelings to Khun Lin. She knows that she is not as elegant as Mei Jing or not as cute as Nan, but is it not possible for her to love Khun Lin? Her confession is so genuine and cute. Khun Lin grabs her hands and tells her that she will have to remember everything she said. Nark promises to be accountable for her words and to never leave his side. While Nark and Khun Lin are confessing, Jongsing is eagerly waiting for Nark to promise to Khun Lin and Danny is standing on the side looking annoyed (Is this jealousy?!). 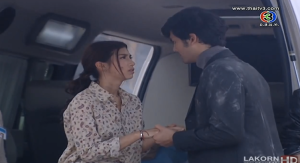 Patrick goes to the hospital. Since Khun Lin claims that Nark is dead, Patrick wants to see the body. He checks the body and hears the report by the doctor. He is convinced that Nark is dead but vows to keep looking for Carlos. If Khun Lin tries to get on his way too, he will not let him go.

Khun Lin visits Nark in her hospital room. He recognizes that the only mistake he made was not to love/pick Nark first. Khun Lin is about to kiss Nark on her cheek when Danny interrupts him (Danny seriously!!! You couldn’t have waited?! T_T). Danny teases Khun Lin; Khun Lin can keep doing whatever he intended to do. Danny promises to close his eyes. Khun Lin is annoyed and asks Danny why is he here. Danny explains (Once again) that he is Nark’s friend. Since she is sick he has to visit her. Khun Lin orders Danny to stop meddling with Nark. He wants him to leave Nark alone. Nark wakes up and is caught in the middle of the argument. She is unable to defend Danny, who leaves but not without telling her that it’s the end of their friendship. Khun Lin holds on to Nark. Did Nark forget what’s their relationship now? Nark is all shy but admits that she remembers. Since she remembers, Khun Lin wants Nark to tell him that she loves him and then kiss his cheeks. 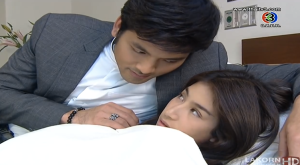 Mina and Puey Lin visit Nark. Nark finally explains how she tricked Yong Wen with the help of Chin Fu and Khun Lin. She admits that she hadn’t planned for Yong Wen to blow himself up though… When Puey Lin leaves, the two girls talk about their respective relationships with Puey Lin and Khun Lin. Nark still doesn’t know how to act with Khun Lin. What should she wear or say? Mina encourages her to be herself. Mina also tells Nark that she is now engaged to Puey Lin. 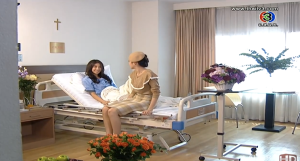 Yuttapong tells Nark about her real father. Nark is shocked and scared that her family will not love her as much, but Yuttapong and Nan reassure her. Nothing will change their relationship. Yuttapong also tells Nark that Khun Lin asked for her hand; as her father he already agreed. Nark gets mad and says that she will not marry Khun Lin.

Khun Lin realizes that he should have asked Nark himself. He tries to talk to her but she keeps avoiding him. What Nark wants to hear is a love confession. She also wants a formal proposal. Khun Lin ends up kneeling in the lobby of the hospital and proposing to Nark. She happily agrees to marry him, which is witnessed by their close relatives – Puey Lin, Mina, Yuttapong, Nan, and Jongsing.

Later on, Khun Lin insists on sending Nark to England. Patrick might be coming back and he wants to make sure that Nark is safe. Her identity is changed but it’s better to be safe than sorry. Before leaving, Khun Lin convinces Nark to register their marriage. They can have a ceremony after she completes her studies.

Recapping this drama was a long journey. It wasn’t that bad but I expected more of the show. The hype was not worth the wait. There were several weak points:

– The lack of realism in the fighting and shooting scenes. I seriously can’t get over the Kung Fu fight between Puey Lin and Khun Lin. It looked so ridiculous.

Now on to the strong points:

– The bromance between Jongsing and Khun Lin. I hope to see more of those two together in other dramas. Not’s acting was really convincing.

– I was happy to be introduced to the couple Bank and Nychaa. Their story was a little rushed but still interesting.

– Bomb’s acting sort of got better toward the end and I think he has a lot of potential for growth. Apparently he is getting scouted for more and more projects!

– I have seen a lot of blogs and commenters talking about a sequel. I definitely wouldn’t be against! We’ve had a lot of sweet moments between Khun Lin and Nark, but I think we could use some more :-D. Plus Patrick still seems suspicious about a lot of things. He didn’t seem to be the kind to give up.

I always had doubts about Danny’s feelings for Nark, but this episode kind of confirmed it. His expression when Nark and Khun Lin were confessing to each other was so over the top. Everyone was eagerly waiting for the love confession except him. It also seemed like he didn’t want to hear it, and when it happened it kept annoying him more and more. Also Khun Lin might be even more possessive of Nark because he knows that Danny has something in mind. A man would know another man best.

The cute scenes between Nark and Khun Lin in this episode convinced me that they complement each other. Nark acts so childish when it comes to feelings and love. Like I’ve said before, her IQ is high but her EQ pretty low. She doesn’t know how to deal with her emotions, which often causes Khun Lin to tease her. At the same time, Nark brings the fun side of Khun Lin’s personality out.

Please feel free to comment! I hope you enjoyed my recaps ~