Since Sanaeha Sunya Kaen, I haven’t watched a captivating slap kiss. I found this drama on Viki while desperately looking for a new lakorn to watch. It’s the first time for both main characters to be in the limelight and I have to say that I am impressed by the main actor’s skills.

The story picks up pretty quickly. First episode is usually the introduction of the characters and their individual stories. Here, we already have a lot of interaction between the leads and it’s easy to spot the male lead’s interest for the female lead. Despite him being married…

Sake is a wealthy businessman managing Empire – a large department store. He works alongside his mother and sister; the three of them make a pretty strong team. They get along perfectly when it comes to business decisions, but completely disagree when it comes to Sake’s wife, Id.

Id and Sake have been married for several years but still don’t have any children. Id had a miscarriage and since then she’s been unable to be pregnant. Sake’s mother is at wit’s end and pressures the couple to produce an heir. Sake is supportive of his wife but it’s easy to see that he can’t wait to be a father. 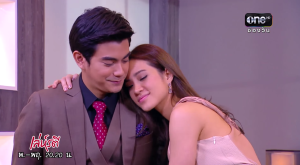 Kate is a college student and model. She lives a perfectly normal life with her parents and two siblings. She is talkative, bubbly and likable. Her boyfriend Pu and her have been slowly making marriage plans; it’s almost the perfect love story as they know each other since they were children. Their respective families are also happily expecting Kate and Pu’s marriage.

Sake and Kate first meet at a photoshoot for an Empire commercial. Kate’s father, who works at Empire, helps her get the modeling job. The two main characters get into an argument as soon as they meet, almost leaving Kate without the position and her father jobless.

One thing is for sure: Sake can’t take his eyes off Kate. He keeps scolding her but smiles when he looks at her – without her noticing of course. Kate might not notice the attention but Sake’s younger sister – Pak – does.

Sake and Kate’s worlds come down crashing when the lies of the people closest to them are revealed.

Sake’s mother drags Id to the doctor, where they learn that she can’t bear a child at ALL and that from way before she met Sake. Id was in a car accident and had to have her uterus removed.

Sake realizes that Id lied about her pregnancy to get married to him. What was Id’s motive? Money or love? Only Id knows the answer. Id is quickly kicked out of the family house, leaving a heartbroken and cold Sake. Of course, Id vows revenge. This will surely turn ugly. I have to say that part of me understands Id. She can’t have a baby; it’s not that she doesn’t want one. For a woman, it’s a terrible feeling. She must have thought that no one would want a woman that can’t have children. I understand where she comes from. Id could have told Sake though. He loved her so much that they could have worked something out. The lies about the pregnancy and the miscarriage doomed the relationship.

Meanwhile, Kate learns about her father’s gambling. Kate’s father had been pretending to go out with friends or to meet clients for quite some time. Being addicted, the father embezzles Empire’s money and even steals jewelry from his wife. Debt collectors start going after Kate’s father, threatening his life.

Sake wakes up from the stupor caused by the breakup when he learns that Kate’s father is the one who embezzled company’s funds.

I love the fact that Sake is able to start getting back on track so quickly. I wish it was that easy in real life.

Meanwhile Kate realizes that she will have to sacrifice a lot for her family, including her relationship with Pu.

Kate’s father decides to offer his daughter in exchange for his debt being erased. The father proposes that Kate gets together with Sake to bear him an heir. Ugh, I can’t stand the fact that Kate’s father sells her to save himself. He keeps stooping lower and lower; I didn’t even think that was possible. Here is Kate’s father sale pitch: “My daughter is healthy and a virgin. She will make a good breeder.” Ugh I can’t even… 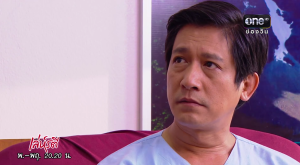 The chemistry between the two leads is there although it might not be the best… I want to give it some time though. There are many more episodes to come, and room for both actors to build their chemistry and acting skills. Honestly, Sean can’t be as bad as Dome 😀 so it should work.

For Sake, it’s mainly about accepting that love is not always where you expect it to be. He blindly trusted Id and failed to see signs of her treachery. When he first gets together with Kate, he only wants to have an heir. Unexpectedly, for Sake, he develops feelings for Kate.

9 thoughts on “Leh Ratree: A Slap Kiss to Kick Start My Lakorn Year”