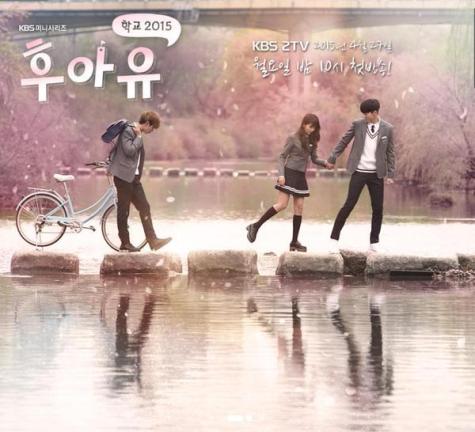 I’ve always loved a doppleganger switcheroo trope and the secrets in the this show are keeping me interested for sure! The show is about Eun-Bi and Eun-Byul, a pair of separated twins who cannot be leading more different lives. Eun-Bi lives at an orphanage and is like a mother to all of the younger kids at the Love House. However, at school, she is viciously bullied around by a trio of girls led by the nasty So-Young. So-Young is an entitled transfer who gets pleasure out of torturing Eun-Bi for the reason of “just because”.

While Eun-Bi tries to stay positive, the school system is against her and does not help her, a child with no parents. Meanwhile, Eun-Byul lives with her adopted mother and is popular at school and loved deeply by her mother. Eun-Byul has a stand-offish personality and prefers mostly to keep to herself other than her other two popular buddies. She also has a tentative relationship with Han Yi-Han, a rookie but talented swimmer. He knew her when they were younger and its a mutual crush between them two even though she tried to cut off their relationship.

What is odd though is that Eun-Byul seems to know of her twin’s existence down to where she lives, but Eun-Bi has no idea she still has family left in the world. Eun-Byul would sometimes send gifts to her sister under her mother’s name. On a school field trip, Eun-Byul arrives at Eun-Bi’s town, intent on finding her. However, on the way, she seems to be bothered by a mysterious person who keeps on texting her threats. Judging by her conversations with her peers, Eun-Bi seems super stressed, exhausted, and threatened. Eventually, she goes missing, possibly kidnapped or a runaway.

Meanwhile, Eun-Bi is expelled from her high school for an incident that she did not cause, but got blamed on. She has had enough of suffering and decides to commit suicide off a bridge. However, we see that someone saved her, but we don’t know who it was. She ends up in a hospital, but WITH NO MEMORIES.

However, she was wearing a sweatshirt that Eun-Byul has one of too and Eun-Byul’s mother’s handkerchief. It is possible that her twin saved her and exchanged their lives for some reason. Eun-Bi now lives the life of Eun-Byul without knowing any better and only has minor flashbacks that she can’t decipher. Everyone notices her complete personlity change. Meaner forces are at work in this supposedly greener side of life. She seems to be set up to be a thief as a classmate implicates her for a jewelry robbery as they found the item in her school locker. Did Eun-Byul steal it, was she set up, but what an inconvenient time for no memories for poor Eun-Bi who can’t defend herself.

Again, this drama is shedding light on the bullying issue that is super prevalent in the school setting. We see that with Angry Mom, and we also see it here. The scene where Eun-Bi gets cooking ingredients dumped on her head reminds me strongly of Boys Over Flowers. I find it so sad that the school systems seem incredibly corrupt and bends so strongly to the parent’s wills. However, I realize that is where the funding and reputation comes from. However, the teachers have no power and don’t give a damn about the students, especially the rampant bullying right under their noses. Instead, they scrape and bow to parents and money. Not only at Eun-Bi’s public school, but on a larger scale at Eun-Byul’s private school. On a higher class level, the mothers form tight-knit power groups that get the latest information and tests and other academic things for their children. They use money, bribes, power, anything to get a step up on each other. Everyone is two-faced.

As for acting, Kim So-hyun has always been a strong child actor for me who is transitioning nicely into female leads. She is playing two characters here and I am eager to see how subtly she will engage in those roles. Our male leading role is played by Nam Joo-Hyuk who is tolerable, but nothing to write home about yet. We will see if this will be his breakout drama. Lastly, Sungjae of BTOB is surprisingly expressive and endearing to watch on small screen. He has a certain charm and is playing supporting roles pretty well. I hope to see him do meatier stuff soon as well!

However, what really intrigues about this show is Eun-byul’s mysterious actions, more than Eun-Bi’s character. While in the beginning Eun-Bi is your typical Candy working three part-time jobs and trying to stay positive, Eun-Byul seems smarter and more angst-ridden. She has a huge scar on her neck from who knows what and seems to keep everyone at a distance. Furthermore, she knows about her twin and is making steps to do a switcheroo. For a selfish reason or to give Eun-byul a chance to live nicely as well? I am so curious as to her intentions and also curious as to how Eun-Bi will take all that has happened. Is this nature vs nurture? Will Eun-Bi become more Eun-Byul like? I am excited to find out!