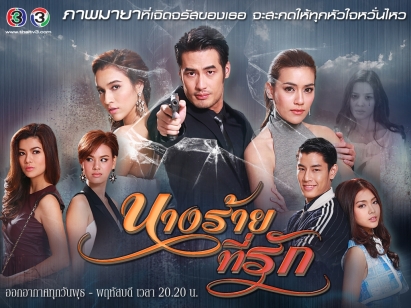 I am a big fan of Kim, but since her Raeng Pradtanah days I haven’t enjoyed her lakorns as much. Maybe I am not a big fan of the Kim-Mark pair? I find them cute as a real life couple but their on screen chemistry just doesn’t cut it for me.

I am happy to see Kim paired with Boy in this lakorn! Kim’s character, Pim, is a famous actress known for her nang’rai roles. On screen, Pim is always about some good hair pulling and attacking other women who attempt to “steal” her man. In real life, Pim is strong and determined, but also kind-hearted and loving. That could come as a surprise for many, including Boy’s character, Natee.

Natee is a police officer, who pays no attention whatsoever at daras (celebrities). He finds celebrities to be as fake as one can be. So when he is sent on a secret mission that involves Pim, Natee is not too happy about it. He will have to protect Pim, who has been receiving death threats. Let me tell you, those threats are no joke. Every time Pim is on the set of her lakorn, an incident happens, making the crew wonder if this lakorn is cursed. I would be worried too. From a real gun being used during a scene to a chandelier falling, it gets creepy. No worries though, Natee is here to save the day!

So who is after Pim’s life? Pim is highly suspicious of the wife of Danai, an entertainment businessman. Pim starts getting close to Danai despite him having a wife, which spurs jealousy. What the wife doesn’t know is that Pim only wants to get close to her hubby because she suspects that he might be involved in the murder of her sister.

On the other hand, given Pim’s popularity, anyone who is interested in being a leading nang’rai is a potential suspect. At the same time, all the incidents in Pim’s life give plenty of occasions for Natee to shine. Eh, always saving the damsel in distress. But hold on, let me explain that Natee is also popular among the ladies. One of them being an actress playing in the same lakorn as Pim: Nath. Nath often portrays the nang’ek, except that her character and her off-screen personalities are totally different… It’s funny how we tend to forget that actors are only playing characters – who they are on screen doesn’t reflect who they are in true life. This perfectly applies to Pim and Nath.

The lakorn also sheds light on the dark side of the entertainment industry. Several actresses are tempted to sell their bodies to obtain leading roles. Being the leading nang’ek or nang’rai isn’t easy… Sadly, once they sacrifice their bodies there is no going back.

Something that I absolutely love about this show: Despite the bickering between Pim and Natee, both are physically attracted to each other from the get go. They can deny it but it’s so obvious. It’s different from other lakorns where the dislike between the two leads last too damn long. Plus I get tired of main leads calling each other ugly for several episodes in a row, making us viewers wonder if they need new pairs of eyes.

Note: This lakorn is directed by Ken’s beautiful wife Noi!