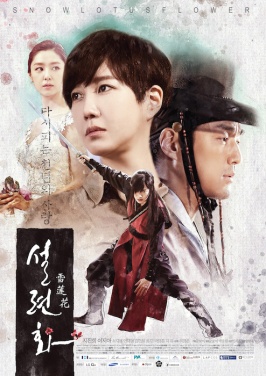 Another modern saguek fusion like Splish Splash Love, but with a different take on reincarnation. Snow Lotus focuses mainly on two characeter’s lucid dreams about a past life in Joseon times. These dreams feel so real to them that they keep on trying to find connections in real life that pertain to them. Ji Jin Hee plays San Baek and Soo Hyun. San Baek plays the historical part of a commoner’s son who ends up becoming a scholar using a secret identity. Lee Ji Ah plays Yeong Dae and Yeon Hee. Yeong Dae is nobleman’s daughter who is skilled in swordplay and in an arranged marriage with her childhood friend Moon Jae. However, Moon Jae’s love is not reciprocated in her. Instead, Yeong Dae falls in love with San Baek which Moon Jae tries to break them up. Their love story ends in tragedy when Moon Jae accidentally kills Yeon Dae. Fast-forward in modern times, Soo Hyun is the CEO of a gaming company who ends up hiring intern Yeon Hee as a character designer. Yeon Hee, an artist masquerades as a man for a large part of the story due to certain circumstances during hiring. Both of them keep on dreaming similar dreams and searching for their counterparts. However, their happy reunion is cut short by Moon Jae’s modern reincarnation of Yoo Ri. As a punishment for killing Yeong Dae in the past, he is reincarnated as a woman who ends up being in love with Soo Hyun. Like her past counterpart, she throws Yeon Hee off the roof of a building in a fit of anger after Soo Hyun cancel’s their loveless marriage ceremony. Will history repeat itself in the form of a tragic ending?

As a two episode drama, it was a decent watch, but not give me the feels. I enjoyed the unique storyline of lucid dreaming and reincarnation, but was not feeling the chemistry as much between Jin Hee and Ji Ah. Perhaps a different pair of leads would have made the story more heartfelt? However, I feel there was a marked improvement of Ahn Jae Hyun from Blood to this saguek character here. His villainous role was very on point. I did find it interesting how the drama played up the genderbending portin of the story. For a large of the drama, when Jin Hee’s character did not know that Ji Ah’s character was a woman, Jin Hee’s character did not seem too bothered that he was in love with a man both in his dreams as well as in real life. I find that to be refreshingly progressive and different.