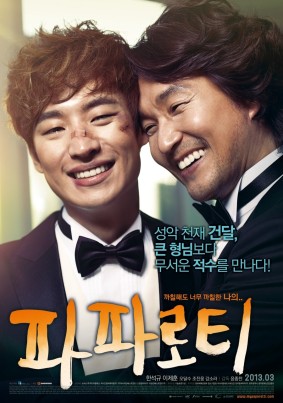 After watching Lee Je-Hoon’s fantastic role in Signal, I became interested in his other projects. Thus, I watched, My Paparotti, which is based on the true story of Kim Ho Joong, an opera singer who moved his audience to tears through his voice and troubled upbringing. Adapted into a film, Lee Je Hoon plays Jang Ho, a teen who is part of/head of a large gang, but dreams of becoming a tenor. Every since his grandmother died, he had wanted to fulfill her wishes of him singing on stage. However with his troubled lifestyle, he had been kicked out of four schools already. Finally, a fifth school decided to accept him into their music program. He meets Teacher Sang Jin, a past tenor who had a promising opera career before a vocal cord tumor shoved him out of performance forever. Both Sang Jin and Jang Ho have prickly personalities and of course they butt heads. Sang Jin thinks of Jang Ho as the trash of society because of his gangster lifestyle. Jang Ho doesn’t respect Sang Jin as a role model or teacher. However, slowly they begin to understand each other and compromise. Sang Jin becomes like a father to Jang Ho to the point where Jang Ho is almost integrated in his family. Jang Ho’s beautiful voice is molded carefully into performance standards by his new teacher. Sang Jin even tries to make Jang Ho’s Boss let him out of the gang by offering his own foot for exchange. Jang Ho is very moved by his teacher’s efforts and feelings. Thus, he decides to give up this lifestyle and not fight any longer. We see a real change in his attitude when rather than fight his attackers who trapped him before his concours, he only defended himself and focused on rushing to the competition as soon as he could escape. Although the competition itself was finished, his teacher fought for a chance for him to sing on stage.

I am very impressed with Lee Je Hoon’s acting. He is able to convey conflicting emotions very well. Furthermore, he does a great job lip syncing the opera parts which are sung by another artist. This is the second time seeing him play a “gangster” or “rough and ready” type role, with the other being Signal. I also enjoyed the touching dynamic he had with his mentor. The way they sang the non-opera duet was quiet moving and really conveyed their dreams and hopes for one another. Overall it is a great feel good movie with comedy and warmth.