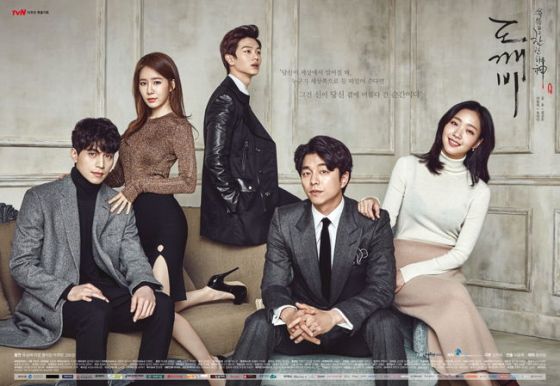 Dreamy and absolutely beautiful. I am in love, all the feels kind of love. To be honest, I was really hesitant to try the drama at first due to the vapid Descendants of the Sun….and the hit or miss track record from Kim Eun-Sook. For me, her dramas usually start out fantastic….and then peter out. However, this drama has got me wrapped around its finger.

With an amazing cast, beautiful filming and a gorgeous OST to boot, it hit the trifecta for me. Goblin tells the story of Kim Shin, an immortal being, who is waiting to find his bride so that he can finally die in peace. Hundreds of years ago, Kim Shin was a proud warrior who defeated many of his enemies, but was ultimately betrayed by royalty. He was unjustly branded a traitor by his country and his family ended in tragedy, including his sister, the young queen. He ended up being run through by his own sword.

As a result, the gods above decided to give him both a punishment and reward. He would live forever while remembering all the deaths around him until he can find a bride to pull out the sword that is stuck in him.

Fast forward a few hundred years, the Goblin decides to save the life a young mother and her unborn child. With this action, he unknowingly branded the babe who would grow up to be his bride.

Unfortunately, the young babe, Eun-Tak, grew up in abusive circumstances after her mother died. She ended up being bullied by her aunt and her children most of her life, as well as at school. However, she retained her positivity and kindness with a little something extra. She was able to see spirits and they would constantly badger her about being a goblin’s bride.

Meanwhile, we also meet Wang Yeo, a grim reaper who had wanted to take Eun-Tak’s life many years ago, but his job was muddled by the Goblin. In a twist of circumstances, he ends up meeting the Goblin and even living with him. He ends up conflicted about whether to take her soul now due to the Goblin’s protectiveness of Eun-Tak.

At first, the Goblin is distrustful of Eun-Tak and doesn’t think she is his bride. However, they slowly warm up to each other as he is taken by her quirkiness and forcibly summoned to her every time she blows out a flame.

Wowowowowow. The whole drama is just so dreamy and whimsical. From the beautiful scenes in Goryeo time to the supernatural parts, everything is gorgeously filmed. The cast is also stellar. While my secret wish was to see the young queen and king more, I should be content that they are reincarnated into equally if not more awesome actors. It is not often that we get to top male leads such as Gong Yoo AND Lee Dong Wook.

Double the bromance, double the fun and eye candy. Gong Yoo’s eyes are so damn expressive that he communicates the finest of emotions. I also love Lee Dong Wook’s quirky stoniness and I foresee heartbreak in the future once he learns who he is the reincarnation of.

As for Go Eun, every since Cheese in the Trap, I’ve thought her a capable actress. While I am not completely a fan of her cutesy style so far, I am thinking that it will change soon as she matures out of her teenage years? I know some people are little weirded out by the age difference….900 vs 19, but remember Twilight? Not that its an excuse. Lucky for us, Gong Yoo and Go Eun have excellent chemistry and the supernatural flair heats everything up!

Humm, a drama with Gong Yoo. I wasn’t convinced at first. I wasn’t a big fan of Coffee Prince and Big was a disaster (although I managed to finish it). But then I loved some of his movies, especially Silenced and Train to Busan so why not give him another chance drama-wise? I don’t regret my decision at all so far. There are so many things that makes me fall in love with this drama with every single episode that I watch.

First, the cinematography. I am so glad that they went all out with the visuals. It makes the show so pretty, which is a must when it comes to the fantasy genre. I hope other directors and drama studios are taking notes, no more cheap visuals please.

Second, the pace of the story. It moves quickly but without leaving out any precious details along the way. There is a lot of back and forth between the present and the past. I am glad that I don’t have to rewatch episodes because the plot is confusing and doesn’t make sense, which I think does happen too enough. Cough, cough Legend of the Blue Sea. I hate comparing shows but here I must. These two seem to be the two dramas of the moment . Most Kdrama fans are at least watching one if not both of these shows. And when I compare Goblin to Legend of the Blue Sea in terms of plot it is a clear win for the former. Legend of the Blue Sea fails doesn’t have as much of a logical flow; and it is quite confusing at times. For instance, I wasn’t clear if the mermaid was a reincarnation of the Joseon mermaid or the same Joseon mermaid…

Third, the unlikely pairing between Gong Yoo and Kim Go Eun . Too often, dramas tend to present us with two extremely attractive leads who have 0 chemistry. I don’t care how handsome they are individually because what I need is the main couple to make me feel butterflies in my stomach.

Here, Gong Yoo and Kim Go Eun do just that. Although, phoenix is not a big fan of the cutesy act from Eun Tak, I personally love it. For instance, every single time she said “I love you” to Kim Shin, my heart melted.

Fourth, the unpredictability factor. You can usually tell the direction dramas are heading in after watching a few. It doesn’t always get extremely original but Goblin managed to surprise me in only four episodes. For instance, I didn’t expect Kim Shin to save a baby who would later become his bride. And an even bigger surprise is the true identity of Wang Yeo. As previously mentioned by phoenix, I wonder how this discovery will hurt the bromance. For Kim Shin, bitterness might surface again and even a desire for vengeance. I already feel the angst… And I am impatiently waiting for it.

One thought on “Goblin: Sorrowful Love”