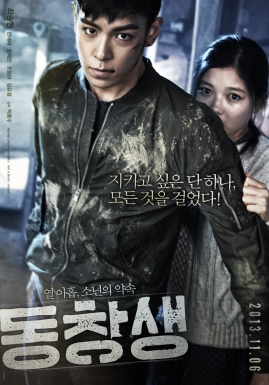 Commitment is a pretty good spy-betrayed-revenge movie that stars T.O.P as Myung-hoon, a North Korean sleeper spy in South Korea. Under the guise of a high school student, Myunghoon’s mission is to eliminate political competition through assassination of a different faction’s spies. After his father died for the same mission, Myung Hoon takes up this spy role to save his sister from further punishment in the labor camps. Even though Myung Hoon is very young, his skill set is very developed to the point where he eliminates older and more seasoned spies with ease. However, after political turmoil in the north tips the power scale to a different faction, his own handler betrays him. He becomes a wanted man in the South and the whole national security force is on his tail and the bag of diamond funds he stole from another faction.  Angered and confused by this turn of events as well as the impossibility of seeing his younger sister again, he decides to lay low at a friend’s house. Although he was told not to make friends, he develops a crush on a girl with the same name as his younger sister. The girl protects and helps him even though she realizes that he is a wanted North Korean spy. His sister was then brought to S Korea as bait to hand over the diamonds, but the hand off did not go as planned. Even the sister made it to safety, his friend gets captured. Myung Hoon goes on suicidal mission to rescue his dear friend, even knowing that he is outnumbered and that it would be hard to get the police force on his side.

Coming from watching TOP in IRIS, also playing a spy role, I believe he made a marked improvement. As a movie with not much dialogue, he did use his face expressively enough for me to feel his sincerity. I very much enjoyed the slick fight choreography though. Because Yoo Jung is a very capable actress, I do wish she had gotten a bigger role in the movie other than just being the little sister used as bait. A waste of talent that could have been used to a greater advantage! Otherwise a enjoyable action flick!