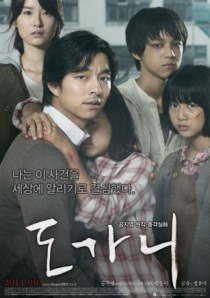 Kang In Ho is hired as a art teacher in a school for deaf children, outside of Seoul, in Mujin. He is looking for a change; his wife passed away and his daughter now lives with his mother. In Ho knows sign language and hopes to connect with the children at Ja Ae Academy. Yet, his cheerfulness and enthusiasm quickly deem as he discovers that children are reserved and seem to be scared of something.

In Ho sees Yeon Du, one of the students, having her head shoved down a laundry machine by one of the teachers. When In Ho takes her to the hospital he finds out that she was sexually assaulted at school. Young girls are not the only victims. Young boys are also assaulted.

Other alarming signs include teachers repeatedly beating children who try to run away. Children who run away are immediately brought back by a police officer, who is bribed by the principal.

In Ho is touched by what he sees, but he is worried about losing his job. In Ho’s mother has been supportive of him and helped him follow his dreams to the point of giving up her house. The mother is also the one raising his daughter Sol, and that is even harder since Sol is asthmatic.

In Ho is helped by Seo Yoo Jin, a young activist who helps bring the story to the attention of media.