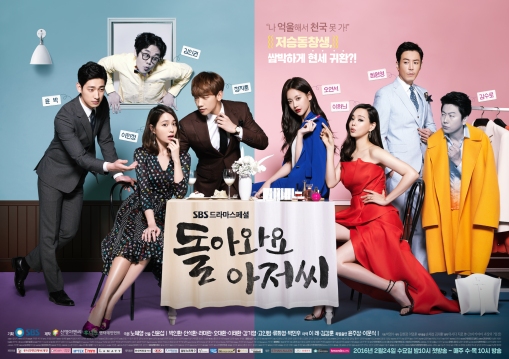 What a pleasant surprise! Judging by the previews, it had looked more like a romcom, but underneath the humorous veneer is more of a melo that tugs at your heartstrings! The drama gives us an almost humorous take on 49days. In here, Kim Young Soo is a loving husband who has literally worked himself to death. He used to be a department store manager before unfortunate circumstances sent him plummeting to his death, which on the outside looked like a suicide. At the same time, another man, Han Gi Tak is a reformed gangster who owned a restaurant. In an effort to help a woman he once loved, he gets caught up in a deeper conspiracy. This woman was a celebrity who owed him her life when they were younger. However, after getting caught meeting up, he embarks on a chase after the paparazzi for taking their photo. Unfortunately for him,after being run over by a mysterious van, his passes away. In the afterlife, even though both were bound for heaven, they felt like they couldn’t peacefully leave things the way they were on Earth. Both jumped off the train headed for heaven and signed a contract to go back to Earth for two months to take care of loose ends. Young Soo ends up in Rain’s body, which is completely opposite for his own not as good looking and disease ridden body. Young Soo is ecstatic that he came back looking like a sculpture and sets out to make things right at his old workplace. He happens to meet his wife who now works there to make ends meet. Meanwhile, Gi Tak comes back in a woman’s body! A very pretty woman’s body…but one that he can no longer fight with. He tries to go back to his underlings, but with this new body, nobody takes him seriously even though he still has the old swagger. In an effort to help out his old lover who has got herself into a bind, he pretends to be his own “sister”.

While episode one was heartbreaking with the main lead’s backstories, the second episode made me laugh my butt off. The acting is definitely on point whether it be past or present incarnations. Rain is hilarious as the newly hot Young Soo, yet still super awkward and still a doofus like his old self. It was so funny in episode 2 where he basically fondles himself all over, admiring his new abs and rock hard pecs/biceps. Furthermore, I feel the chemistry burning between present him and his old wife. I really hope that somehow she will recognize him and that he can leave in peace later on after setting things right. Meanwhile, the new Gi Tak as a woman, Hong Nan, is fantastically comedic. Still not adjusted to being a woman, I love how she still has the old tough guy swagger. I look forward to more gender-swap hijinks and I hope his underlings will somehow recognize him as well!