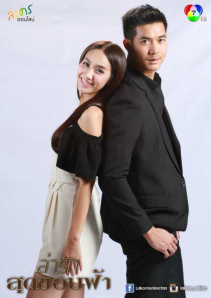 I am so happy to have found this drama. Since Sanaeha Sunya Kaen, I haven’t been captivated by a lakorn. And gosh this show made me a fan of Weir :-D. Weir and Min are adorable together. I have tried watching the first episodes of Pin Anong back then and hated it -___-. I am so surprised that I am enjoying this so much!

Mat is a Thai woman of royal descent who is set to marry Prince Macky, the heir apparent to the throne of the Kingdom of Raya. The fathers of Min and Prince Macky studied together in college and decided to have their kids marry. Let’s say that Mat is far from being the “proper lady” that her parents want her to be. She is into extreme sports, play pranks, and often acts like a tomboy.

When Mat learns that she is to marry a man she’s never met before, she throws a tantrum and tries to run away. Her escape is short lived as she is stopped by Kamin, the bodyguard of Prince Macky. Kamin was sent to Thailand to fetch Mat. The encounter between Mat and Kamin is explosive at first, but they grow on each other.