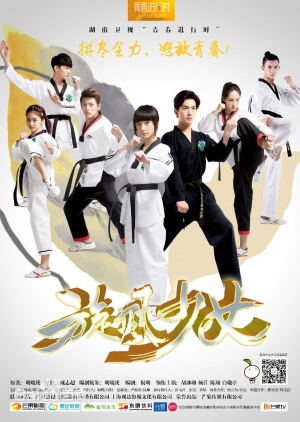 This marks my third novel to drama adaption by Chinese novelist, Ming XiaoXi with the previous dramas I enjoyed being Summer Bubbles and Moon River. Like Tong Hua pieces, I enjoy the way XiaoXi writes her strong female protagonists and swoony male leads. The Whirlwind Girl tells the story of BaiCao, a girl who just recently entered the Yuan Wu Dao (a form of martial arts that focuses on kicking power). After losing her parents at a young age, she was taken in by a former Wu Dao Master named Qu Xiang Nan. However, Qu Xiang Nan carries a horrible reputation in the city of AnYang (birth place of the martial arts style) for cheating in his last competition by using steroids. For BaiCao, Qu Xiang Nan is her father and Wu Dao master no matter what happens and no matter how much she getes bullied or abused because of her master’s reputation. While he could not take her as a disciple, he trained her from a young age to keep up her strength and flexibility. BaiCao grew up that strong positive girl who is willing to do all the work such as cleaning, working part time, etc, to support herself and her master. However, after an incident where her honesty got her into trouble, she ends up kicked out by her previous institute. She is heartbroken by this turn of events. Because her master wanted her to pursue her Wu Dao dreams, he begged another institute, Song Bai, to accept her into training. Although she was reluctant at first, gradually she grew to love her new place of training. It was at this place that she meets three young guys who would each push her to new heights. The first is Ruo Bai, a cold, but ultimately warm hearted instructor at the Song Bai institute. He is always pushing to train her harder, and putting his own time and money on the line to help her. He sacrifices a lot of his own future that BaiCao doesn’t know about.  Second is YuChu Yuan who was a previous Wu Dao genius that withdrew from the support due to a tragic accident between his mother and his friend’s mother. He is studying to become a doctor instead and doesn’t want to touch Wu Dao ever again. His ex-friend, Ting Hao has become a famous international champion due to his talent in Wu Dao, as has his sister, Ting Yi. However, he was a humongous grudge against Yu Chu Yuan for his mother’s accident. He is always challenging Yu Chu Yuan to fight him while his sister is deeply in love with Yu Chu Yuan. With these multiple love lines in place, it both distracts and at times pushes BaiCao to improve her abilities in Wu Dao. With her hard efforts, she ascends the ranks of Wu Dao extremely quickly to the point where she is almost evening out in abilities with Ting Yi. Many people have placed their hopes and dreams upon her.

I very much enjoy BaiCao’s hardworking attitude and absolutely love the parts where her martial arts abilities transcend people’s expectations. It is the underdog effect for sure. Of the three ships available, I am firmly riding the Ruo Bai one. While he seems so cold and unforgiving to many, it is obvious that he cares deeply for Bai Cao’s future. He sacrifices so much of himself for her and doesn’t even care that she doesn’t see it or return the favor. Meanwhile, I do love the banter between Ting Hao and Bai Cao as well. He has a cute crush on her, which she firmly rebuffs every single time. However, she is able to push him back into this passion from Wu Dao. On the other hand, his sister Ting Yi makes me curl my lips in disgust. She is extremely arrogant and bullies Bai Cao all the time, claiming she has the talent, power, and riches that Bai Cao can never have. Furthermore, she always act as the cute spoiled girl in front of the guys and makes Bai Cao seem like a kid. Ugh. While Bai Cao had her sights set on Yu Chu Yuan, the doctor that TingYi is clinging to, I find him pretty boring. I ultimately hope that the Ruo Bai ship sails the furthest.

Now about the martial arts part. It is exciting and right up my alley! While the training parts leave much to be desired, the actual fights are interesting and well choreographed. Some parts are over-dramatized and probably used wires, but they are amusing for sure. I especially enjoy the nonrealistic, but cool triple kick that BaiCao develops as her secret kick.

PS: I heard there is a Whirlwind Girl Season 2 coming out staring Ji Chang Wook, from Healer! Yay!