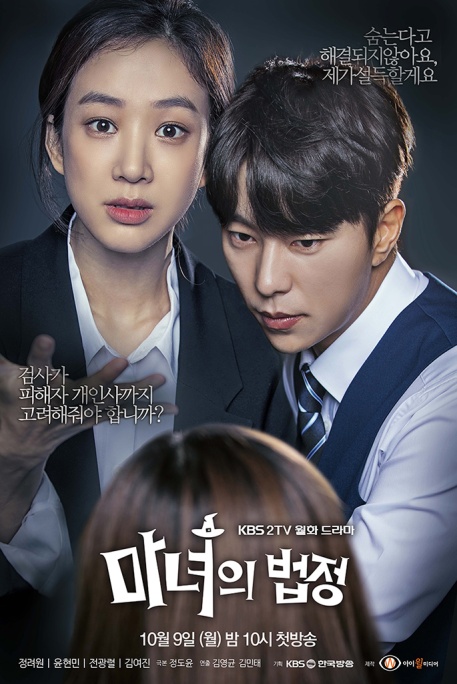 So much sass and so much win. The amount of procedural dramas are skyrocketing this winter and I love it. Witch’s Court tells the story of Ma I Deum, a fierce and manipulative prosecutor who has no reservations and even use underhanded methods in order to win her cases. She has been a prosecutor for 7 years and only cares about her ambition and climbing up that hierarchy. Ma had a rough past where her mother ran away/kidnapped due to a sexual abuse case her mother was involved with. Coincidentally, she was transferred to the sexual violence crimes unit after she offended some higher ups during a case. For her, this was her career’s death sentence at first. However, knowing Ma, she still managed to get on the news for winning her cases in a dramatic fashion. Also working in this unit is Prosecutor Yeo, a past psychiatrist turned prosecutor. He is straight-laced and cares about the humanistic and emotional side of the victims. At first, Yeo is frustrated by Ma’s seemingly narrow minded aim to just win cases no matter the consequences it has on the victim. However, slowly he sees the vulnerable side of Ma whose barriers are slowly broken down by him. They are a match made in heaven in their field, with Yeo molding Ma into a softer version of herself. Unfortunately for them, it seems that their past is tied a little more closely due to the mysterious disappearance of Ma’s mother.

While it is named Witch’s Court, clearly, there is a another name we can substitute it with that also rhymes. You know what I’m getting at! We see a female lead that is the complete opposite of what we are used too and a gender reversal in a way. Ma is the hard, unforgiving, cold prosecutor with a traumatized past. She is the one who is ruthless and only cares about winning. I love the way Ryeo Won portrays this role. She is so expressive and raw in her emotions. It comes off natural and engaging. Yeo meanwhile takes the usual role given to female leads, the soft and emotional side. He cares about the feelings of victims and doesn’t want to harm the victims even if it will win a case. I have loved Yoon Hyun Min ever since I laid eyes on Cruel City. He is a solid actor who is finally getting the lead roles he deserves. Every performance from him has been great and I look forward to him choosing other type of roles other than procedural dramas. While at first, I was shocked and disturbed by Ma’s way, slowly, I came to love her smart and clever thinking. She doesn’t care that people comment on her ambitiousness. She revels in it and uses it to her advantage. She knows how to use other people’s weaknesses and isn’t shy about it. Furthermore, sexual abuse cases is such a sensitive topic in S. Korea and not much talked about it even if it is rampant. We only see articles of it when its someone famous, but I’m sure with the hierarchal and patriarchal society, much of it goes unreported. This drama shines a glaring light at these situations which is a wonderful way to get this problem acknowledged and hopefully ameliorated.

This is my bread and butter, peeps! Good old procedural, crime, squad goals! Some people find small story episodes annoying, but I love seeing all these different cases! Mad Dog tells the story of Kang Woo and Min Joon, two alphas of their field who are tied together by a common tragedy. Kang Woo is the head of Mad Dog, an agency that catches scam artists who commit insurance fraud. He used to be a former detective, but now he manages a team of specialists that help him expose these con artists whether that be through legal or more often illegal means. Before he quit being a detective, he experience a huge trauma. His wife and only son died tragically in an airplane that the pilot was using to commit suicide with. Coincidentally enough, the pilot’s younger brother was Min Joon, Kang Woo’s current competition. Min Joon is a genius swindler who seems have an ulterior motive and has been following Mad Dog closely. He at first seems to be working for the opposite team and naive-looking. However, his true cunning colors show as he is one step before Mad Dog in all their cases. They come to a head when Kang Woo and Min Joon make a bet on an insurance claim issue. Min Joon wins the first round, but shows his warmth by compensating the victims that he seemed to be against at first. Mad Dog are confused at his hidden motives and are not sure whether to trust him or not. However, it seems like he wants to cooperate and bring down these con artists as well!

Woo Do Hwan, my baby from Save Me is giving me another great performance as Min Joon, the young swindler. He has such a large range of emotions, some subtle, some expressive. I love how he can go from naive happy go lucky to cold one 1 sec. Kang Woo played by Ji Tae is a hard hitter too. I’ve always enjoyed his ahjussi roles as he delves into them deeply. Another member of Save Me, Jo Jae Yoon, is now on the moral right side of the squad! Though it looks like he can’t get away form that ex-convict character. He just plays it so well! I love his comedic timing! Mad Dog is shaping up to be an excellent though provoking piece as some procedurals always are. I hope to see a bromance between Kang Woo and Min Joon soon though!

SO SO SO PRETTY. The cinematography in the drama is no joke! The King’s Woman tells the story of Gongsun Li, the daughter of a military general, who was skilled in martial arts and actually saved a young boy named Yin Zheng in her childhood. Yin Zheng fell in love with her and held onto this fervor until he ended up becoming king, but of an enemy territory. Due to the manipulations of people beside him, he became a cruel and ruthless ruler. Meanwhile, Gongsun Li grew up with her fellow disciple and these two were childhood sweethearts. Jin Ke, her fellow disciple under her commander of a grandfather, protected her throughout their lives, but became poisoned during a battle. In order to obtain the antidote, Li made a deal with the king, Yin Zheng. He would give her the antidote if she came and lived with him after Jing Ke got better. While she agreed to this deal, she hated coming to the palace and becoming one of this concubines. However, over time she warmed up to Yin Zheng who showed her a warmth that he kept from everyone else. Yin Zheng even let her keep the child inside her womb for which Jing Ke was the father! Slowly she rose through the ranks of the palace and had the ear of the king. However, she kept him at an arms length because she could not trust him as the enemy of her state. Luckily for her, another disciple who was secretly in love with her hid himself in the palace and become her secret bodyguard. With both the king’s and the bodyguard’s protection, she was able to survive in the harsh palace environment.

This drama was more of a hit than miss for me, but I still did not end up finishing it. The main couple is one of the most beautiful pairs I have ever had the pleasure of seeing! Dilaraba is so gorgeous and perfect for Gongsun Li and Vin exercises a charm that was irresistible. They had amazing chemistry together as well! Furthermore, the costumes and the way the scenes were shot were beautiful. I’m talking about that 1st sword rushing scene with the petals flowing. However, what fell short for me was the plot. The first half was okay, but then it dragged and dragged. I would fast forward through many parts and just watch those two together. And the ending, I heard rumors and spoiled myself. WHYYYY!?!? All in all, it was a decent watch, but just not my cup of tea right now!