I was not a fan of Do Gyun, but that has changed. The more I see him interact with other people in the house, especially Hyun Ju, the more I believe he’s thoughtful. He doesn’t say a lot but he seems to be a good listener. Exhibit A: Do Gyun remembered exactly what Hyun Ju was craving – ice cream – and the exact flavor. This was something Hyun Ju herself even forgot that she mentioned. There is not a lot that we get as viewers from this interaction. We don’t learn anything new. We already know Do Gyun is crushing pretty hard on Hyun Ju.

If Young Joo keeps making a move on Hyun Woo, she might end up heartbroken. Ugh. It’s great that she took the initiative and went on a date with Hyun Woo, but I am not sure this is leading anywhere. I would rather her focus her efforts on Gyu Bin. She could get to know him better and give him a chance.

Young Joo hesitates before asking Hyun Woo to go out with her to grocery shop. She wants to make citron tea. This whole scene was wild. You could see Young Joo hesitating then gathering the courage to ask Hyun Woo, who seemed happy about it. Hyun Ju’s reaction to this was awkward/jealous but not as much as they made it seem in the preview! They made the preview look so dramatic. It wasn’t even that bad. Yes, Hyun Ju was not that happy about Hyun Woo spending time with Young Joo but I can’t blame her. She’s just terrible at hiding her emotions. Hyun Ju’s face is like an open book.

Before grocery shopping, Hyun Woo and Young Joo grab food. I like their interaction. It was more like a couple who has been dating for a while rather than a couple in the early phase of their relation. The conversation was sweet and straightforward (For instance, Hyun Woo asked what’s her ideal type of man).

But then all of this was in vain since Hyun Woo ended up texting Hyun Ju at the end of the day. So confused.

Hyun Woo is a little wishy washy. When he came into the house, I was a 100% sure he was into Young Joo. This changed after his date with Hyun Ju, which I understand. Hyun Woo had more time to get to know Hyun Ju with the date but now he did spend time with Young Joo as well. When I saw his interaction with both Hyun Ju and Young Joo, he gives what looks like hints that he likes Young Joo. I just would like him to stop giving false hope to Young Joo if he’s not interested.

Hyun Woo and Young Joo seem to have so much in common too. Plus, he remembered her from before. At this point, I am ready to jump off the Hyun Woo – Young Joo ship. One of the love forecasters made a good point about the Hyun Woo, Young Joo and Hyun Ju triangle. It seems like Young Joo is Hyun Woo’s ideal type as he imagined it. But Hyun Ju took him by surprise. Hyun Ju might not necessarily be his type but there is something about her that attracts him.

At the end of the episode, the two have a heart-to-heart, describing their doubts and worries. 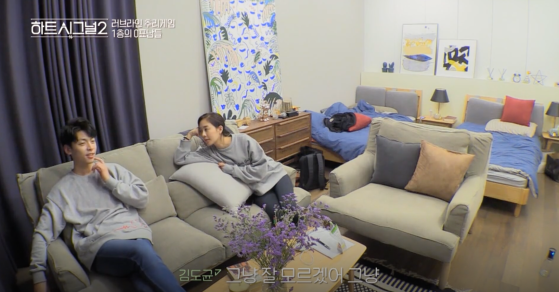 It’s important to note that both didn’t get a text from the person they’ve shown interest in. I sense that Young Joo was hurt about this, especially after the date she had with Hyun Woo. Sort of like her ego being bruised.

However, I feel even more sad for Gyu Bin and Do Gyun. Things haven’t been great for both of them for a while now. That is why I can’t wait for the new girl to be introduced. She’ll spice things up a bit.