The search for Nark continues. Khun Lin is pretty much sure Nark is dead.

Nark, who is passed out, wakes up and finds Khun Lin’s phone laying on the ground. She uses it to call Jongsing. Jongsing can’t believe that she is alive. Khun Lin takes the phone asking if she is alright. Nark asks him the same question. Is Khun Lin alright? Khun Lin answers yes, but where is she? Nark herself isn’t sure. She describes a smelly place filled with garbage. Khun Lin tells her to hang in there. Nark must endure it for him.

END_OF_DOCUMENT_TOKEN_TO_BE_REPLACED

Yong Wen decides to go after the women in Khun Lin’s life. There is no information about Nark so far and she seems to have left town. His men tell him about Nan – a new Thai woman that accompanies Khun Lin everywhere now. Yong Wen guesses that Khun Lin is trying to protect Nark and therefore decides to go after Mei Jing first.

END_OF_DOCUMENT_TOKEN_TO_BE_REPLACED

Khun Lin is worried that Nark will leave his side. He is trying to spend more and more time with her, but she doesn’t notice that it’s more than work related. When they visit a temple, Khun Lin wants Nark to pray with him (Pretty intimate) and then takes her to a famous restaurant.

END_OF_DOCUMENT_TOKEN_TO_BE_REPLACED

Yong Wen is seen crying at Bai Ling’s funeral. The other guest – including family, members of Chaihong Group, and Mei Jing – are also present. Why did Bai Ling die at such a young age? Mei Jing has some doubts about her death. Just the other day, Bai Ling was talking about having kids. Could it be that Yong Wen killed her? Khun Lin is doubtful. Why would Yong Wen kill the woman he deeply loved?

END_OF_DOCUMENT_TOKEN_TO_BE_REPLACED

Nark gets her Rubik’s Cube taken away from her by a professor. The professor turns it in to Khun Lin since he is Nark’s guardian. When Khun Lin sees Nark, he asks her about the cube. Where is it? Nark lies that she left it at home. Danny and her go to the professor and beg to have it back. That’s when she learns that Khun Lin had it the all time. Nark goes to Khun Lin and asks for the cube back. She promises that she will be more careful in the future and not play with it in class. Khun Lin returns it to her and asks her to not be scared of him. I guess he is referring to her lying about having it at home and then avoiding him because of that. Nark explains that she has the feeling that Khun Lin doesn’t want to see her. He always has this threatening expression…

END_OF_DOCUMENT_TOKEN_TO_BE_REPLACED

Mei Jing is playing mind games with Jongsing. Asking him if he thinks she is pretty or to unzip her dress. Jongsing is obviously not indifferent but resists the temptation. What would Khun Lin think if he were to be too close to Mei Jing? 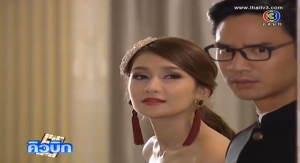 END_OF_DOCUMENT_TOKEN_TO_BE_REPLACED

Nark starts her job as a driver the next day. She takes Khun Lin to a private meeting while Jongsing subs for Khun Lin in a meeting with Sang Hui and Puey Lin. The meeting with Puey Lin and Sang Hui turns sour when they disagree with some of the decisions or contradict each other. Jongsing proposes that they wait for Khun Lin. Sang Hui notes that Jongsing doesn’t seem focused on the meeting. What is wrong with him? Puey Lin throws out that Jongsing might be scared that someone will try to kill Khun Lin (Bingo! You just made yourself Suspect 1). If something happens to Khun Lin, Sang Hui or Puey Lin will become president of the organization.

Nark is growing suspicous of Ah Seng and keeps an eye on him while waiting for Khun Lin to finish his meeting. She is right to do so… Khun Lin comes out of his meeting and is almost in the car when Ah Seng’s accomplices start shooting. Luckily Nark screams soon enough to alert Khun Lin. The latter takes out his gun and start shooting back. Ah Seng also starts shooting. Khun Lin and Ah Seng exchange several bullets. Nark is able to escape with an injured Khun Lin.

END_OF_DOCUMENT_TOKEN_TO_BE_REPLACED

Khun Lin is more and more worried about Nark. First, he is worried because she drives a bike to go to school and work. What if she gets into an accident? Second, why is she still spending time with Danny? Khun Lin is pretty much ready to do anything to get rid of Danny. If Danny doesn’t do better in school he will be expelled (Power trip much). Nark promises to help Danny study but Danny tries to explain to her that Khun Lin doesn’t care about his grades; Khun Lin is jealous of his relationship with Nark. Nark thinks Danny is crazy. How could Khun Lin look at a girl like her? 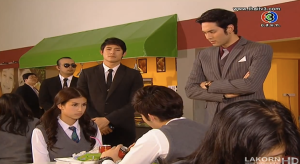 END_OF_DOCUMENT_TOKEN_TO_BE_REPLACED

Patrick is determined to search the ambulance when he is informed that Carlos is on his way there. He alerts his men hoping that they might capture Carlos. The diversion was actually created by Carlos and Danny. It gives the time to Nark to safely pass the checkpoint and deliver the weapons. When the ambulance drops her at the hospital, she doesn’t know how to head back home. It’s heavily raining and there are no cabs. That’s when Khun Lin arrives and offers her a ride. He heard everything from Jongsing and the school nurse. He is not only her debtor but also her guardian. How could she do something so stupid?

Nark and Khun Lin are on their way to meet Danny and Khun Lin keeps glancing at Nark just to make sure that she is alright. He also gives her his scarf. When they arrive, he decides to meet Danny by himself and give him the money. Khun Lin warns Danny. He has to stop seeing Nark; she is not a crook like Danny and his father. Danny is offended. Why is Khun Lin so preocuppied by Nark? Nark is the one who took the job and isn’t it Khun Lin who wanted her to make this deal happen? Khun Lin explains that yes he wanted Carlos to sign the deal but it doesn’t want Nark to be in danger. Danny is not stupid and realizes that Khun Lin might be interested in Nark. 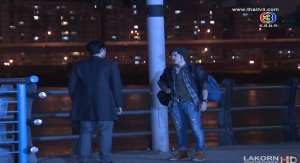 END_OF_DOCUMENT_TOKEN_TO_BE_REPLACED

Carlos agrees to sign the deal with Khun Lin. Carlos tells Khun Lin that he picked the right person – Nark – for this deal. It’s only thanks to her that he will sign the contract in two weeks. Why two weeks? Khun Lin doesn’t understand why the deal can’t be signed now. He is almost certain that Nark agreed to another condition with Carlos. Nark denies it but Khun Lin is far from being convinced. Khun Lin has no choice but to congratulate Nark for now. 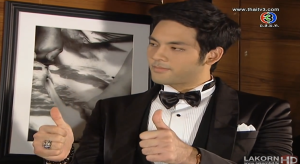