Mike leaves Guy’s place and spends quite some time pondering the situation when he gets back home. He is not the only one lost in his thoughts, Guy is unable to sleep and Aom is still crying.

The next morning Guy serves Aom breakfast and both start eating together while Mike visits Min at the hospital. The doctor said she could be discharged in a few days and have check ups every six months. She asks if Aom is alright with Mike taking care of her everyday (Please stop talking and just recover pshhhhhh)? Mike doesn’t answer. Min asks if Mike loves her? She has never questioned it but now that Aom is in his life she isn’t sure anymore. Is it too late? Mike’s question for Min: why is she asking now? He doesn’t answer any of her questions and just orders her to eat. He has to leave for work and will come back later to check on her.

The paparazzis and the guy who works in Mike’s agency are trying to figure out when to publish the pictures they have. If they wait too long, they might not be able to sell it for a good price and they might not have the exclusivity. They conclude that it’s best to have it out as soon as possible (Trouble is coming). 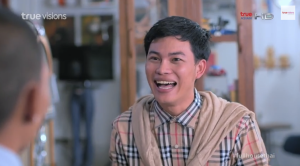 Mike goes next to the wall with the drawings of Aom; he wonders when she will come back (Once you stop acting like a fool). 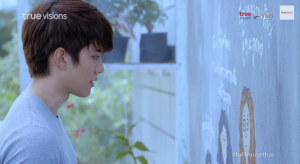 Oom starts a laundry service at home. People deliver their clothes and Oom washes them at her place and then returns them. Seeing the hardship Oom is going through while pregnant, Pao goes to Mike and asks him for a job. He also wants to borrow money from Mike (I started to have some faith in Pao but he had to ruin it all). Pao admits that he used all the money Aom gave them to buy stocks. His stocks went bad and Oom is threatening to break up with him. How can Mike be sure that he won’t waste the money again? Pao gives  Oom’s account number to Mike; the money can directly be deposited there. Mike doesn’t agree to that solution but still gives him so money (Double the amount Pao asked for). Pao needs to improve and become trustworthy. Pao can start the next morning but if he doesn’t show up he will need to get out of Oom and Aom’s lives. Oom is so happy when she learns that Pao found a job! 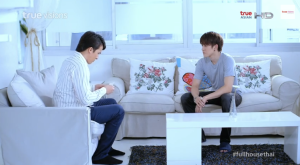 Guy takes Aom next to the ocean. They are having dinner next to the water and  talk about how to deal with the situation. Aom says that she will try to forget everything and focus on her writing if Guy still wants to coach her. Guy asks her how long it will take Aom to forget Mike; he wants to know how long he should wait (Internal scream of approval). He adds that it actually doesn’t matter how long he has to wait as long as she gives him a chance. Guy wants to be the first person that Aom thinks off when she is ready to start a new relationship. No pressure; Aom can take her time. 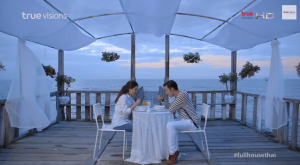 Mike is still waiting for Aom to come home – obviously not tonight. Aom is now sitting outside and Guy asks her if she is ready to go home. Guy likes her being at his place but isn’t that detrimental to her reputation? Aom is just worried about going home because she doesn’t want to see Mike. She stays for another night.

Pao is on time on his first day. He has to drive Mike to the hospital. Is Mike sick? Mike tells Pao that he only has to drive implying that he shouldn’t meddle. Min wants them to go to the beach after she recovers. The last time they went was such a long time ago. Mike teases her: she was still fat back then. To make it up for the comment about her weight, Mike tells her that she is the most beautiful person in the world. No one is above her. Min laughs and tells him that it’s hard to believe that she could have forgotten how nice Mike is to her. They are interrupted by the doctor. She can be discharged this afternoon. 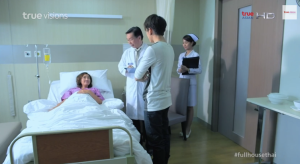 When the doctor leaves, Min happily thanks Mike for everything. Mike says that he has to keep his promise no matter what. Is he only doing this because of the promise? Mike says that he doesn’t want Min to accuse him of breaking his promise again. He will come later to pick her up. Min says that there is no need to come pick her up. If Mike is doing it only because of the promise then he shouldn’t come. Yesterday, she asked him if he loved her. He didn’t answer. Does Mike love Aom? Mike doesn’t answer but his eyes say it all. Mike doesn’t have to answer but at least he should answer himself. What does he really want?

Mike sits in the car and asks Pao to drive around for now. He doesn’t know where to go; he tries to call Aom but she is unreachable. He thinks about calling Guy but his pride and anger stop him.

Aom decides to finally head back home. She is going to grab her stuff and move at Oom’s place for a while. Guy is supportive. 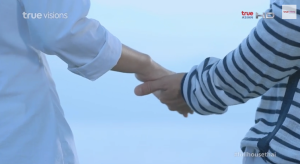 Mike’s boss finds out about the gossips being spread. The manager calls Thot, her assistant, in her office. She wants answers. What in the world is going on? Thot’s mission: contact Guy and Mike. They need to figure it all out today. Meanwhile Mike ends up going to the elderly ballroom dancing. He meets one of the old men that danced with his grandmother last time. Turns out that he used to date Mike’s grandmother when they were younger. The old man confesses that to this day he has regrets. Mike’s grandmother was the one. He tells Mike that when you meet the right person it’s like finding the perfect dance partner. It’s unnecessary to look from left to right. Mike promises to remember his advice and smiles to himself. 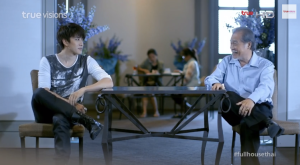 Mike heads to the hospital (I thought he understood the old man’s advice but I guess not)… Min is ready but she wonders what Mike will do next. Will he always come back and forth to take care of her (I guess she is implying that she constantly wants him by her side)? Why can’t he answer the question about his feelings for her? Why did he marry Aom? Mike can’t take it anymore: Does Min really want to know the truth? Fine, he will tell her. When he married Aom, he didn’t love her but now things have changed. He can’t love Aom because of the STUPID promise he made to Min (His eyes are screaming his bitterness). Min is glad that he admits it. It doesn’t matter she says. No matter who he loves and how things go down, she will never let Mike break his promise to her (O_O She is indeed psycho).Min runs out of the room and Mike pursues her. They would have had an argument but they are intercepted by paparazzis. Mike has been taking care of Min for the past few days so what’s the relationship between the two of them? How does Aom feel about him spending so much time with Min? Is the relationship with Aom just a public stunt?

Guy is following everything on TV. When he turns it off, he realizes that Aom has already seen the news. She was standing behind the all time.Guy tells Aom that if she decides to go to Oom’s it will only confirm the news. Aom asks if it isn’t true though.Guy is able to convince her that it’s best to go home for now and figure it out rather than running away. Reporters will get even more aggressive if she tries to go to Oom’s. 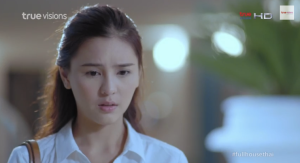 Mike sees that Aom is back and advises her to stay home for the next few days. He’ll figure something out and let her know. Aom doesn’t utter a word. He adds that he is glad that she is back. 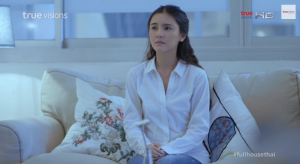 Mike’s manager stops by the next morning. What is going on? How can Aom and Mike pretend like nothing happened. One is watching TV, the other is watering plants. Mike insists that the novel has no ground but she wonders how he can say that. Pictures are leaking out from everywhere – Aom with Guy and Mike with Mintra. Advertisers are canceling their contracts and the ice cream company wants to know what’s the deal too. Mike says that he needs some time to think about something; he will have a press conference soon. The manager tells Mike that she might have to let him go. She has other artists and he ruined his name (I am actually not mad at her. I think she did her best and in her position I would have the done same). Pao, who has been listening the all time, wonders how Mike’s family is reacting. They must be in shock. What if one of Mike’s elder pass out due to the shock and is admitted to the hospital?!Pao’s rant is interrupted by Mike who decides to go see his family. 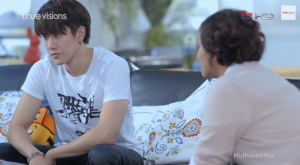 Mike and Aom apologize to grandmother and Mike’s mother. The grandmother can’t even look at their faces. Mike’s mother scold them. How can they fool everyone? Is marriage a joke? And what is going on with Min? Mike explains that it’s not Aom’s fault  but doesn’t answer for Min. The mother tells Mike that she is  disappointed in him. Aom feels so bad that she jumps in. She is also at fault; she wanted her house back so badly that she thought  getting married was alright. Grandmother finally asks how is that alright? Aom is young so how can she just live with a guy? Aom can’t hold her tears back. 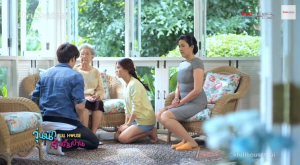 On the ride back, Pao asks them if they really don’t love each other?! How come??? Aom instructs him to stop talking. Mike wonders if Aom would believe him if he told her something. Aom says if it’s true yes but would it change anything? Mike doesn’t reply. When they arrive home, they spot Guy who has been waiting…

Mike finally saw Min’s true colors. I am also glad that she knows about his feelings for Aom. Sadly the promise is still there. Honestly, I think some promises are meant to be broken and this is one of those. Min has no consideration for other people’s feelings. Why should others care about hers?

Guy has been stepping up his game! He is willing to wait no matter how long it takes. Does anyone else need me to repeat how almost perfect he is?! Let’s see how far is sincerity and love for Aom can take him.  His love for Aom is more mature than Mike’s. I wished  the director had given Guy the chance to express his feelings a lot sooner.

Aom has been crying so much it’s not even OKAY to see it anymore. The part that touched me the most is when they were scolded by Mike’s mother. Although the wedding was false, Aom still cared about Mike’s family and I hope they don’t overlook that.